MAN’s priorities for accession and conservation of varieties is as follows:

How has our collection arisen?  From two principle sources: as a result of taking sample fruit during visits to old orchards and receiving apples brought by the public to Autumn shows for identification.  A preliminary identification may indicate if the variety is a local traditional one, or it is ambiguous or uncertain though looks interesting.  During the first ten or so years of MAN we visited over a 150 old orchards.  We have been regularly present at about 6-8 Autumn shows for the last 20 years.

If it looks interesting we have asked the owners for permission to take scions in the winter for grafting onto a selected rootstock (based upon interest, certainty of identification and where space is available in our orchards).

A year or two later, the tree is planted in one of our orchards.  Depending upon rootstock, it will be fruiting within 3 to 7 years.   With “clean” young fruit, identification is usually easier than the old possibly diseased specimens we had to work with initially.  Since the trees were planted we have taken photographic records of the fruit for showing how it changes from year to year according to variations in climate.  This helps when comparing apples with written descriptions (e.g. Hogg), paintings (e.g. Saunders) and photographs (e.g. Bultitude), for instance whether there is more or less russet or colouring in a year.

Typically now, of the apples we receive, ten or twenty each year prove exciting.  It keeps us eager.

Sometimes we makes finds of “lost” varieties and get very excited.

Despite all this effort we still have a hundred yet to be identified.  Some we have a measure of confidence in our identification, but there are many that we may never identify as they could be seedlings.  DNA analysis has helped increase confidence in many identifications.

Our wish is to conserve varieties that originated in or near to the Welsh Marches and those that have been traditionally associated with the region.

During MAN’s 26 years in existence over 50 varieties have been rediscovered that had been thought extinct.  In total about 130 culinary and dessert local apple varieties have now been identified, and about another 100 are currently being investigated, almost certainly resulting in more “finds”.

Our climate is markedly wetter and cooler than in the East of England, and some varieties prosper and others don’t.  When we find a variety that thrives in our rich deep Devonian soils, we will consider conserving these too as a precaution against rapid climate change.

As definitive identification and conservation becomes more important to MAN, we are increasingly working with Brogdale, other private, local and regional charitable collections, and also specialist nurseries, for ensuring that a multiple number of trees, say at least five, are in at least two curated collections.  This will ensure there is little risk that all will be lost before it is possible to re-propagate them.  There is still some way to go for ensuring that this ambition is accomplished!

Many Members have planted their own orchards that contain some of these traditional and “re-found” varieties, thus enabling diversification of the geographic spread back to those areas from where the varieties originated and where they are best suited to local soils and climate.

All those that are described in our publication ‘Welsh Marches Pomona’ are being conserved in our orchards, and most listed in ‘Apples of the Welsh Marches’.  Furthermore, we are conserving some varieties that are not in the National Fruit Collection at Brogdale.  A full list of varieties is available (link to Collection Page).

MAN has three main “museum orchards”, one of which are in Powys, and two in Herefordshire; one of these in Powys is on land owned by MAN.  We have planted about 900 trees variously grown on M9, M26, MM106, M111 and M25 rootstocks.

Members are cordially invited to visit and work in our orchards.  For respecting the land-owner’s interests we do ask that visits are made by appointment with MAN officers.  Please contact secretary@marcherapple.net or membsec@marcherapple.net.

It is the Trustees wish that Members see these orchard assets as a benefit of membership and an opportunity by which to gain interesting and useful experiences.  Volunteer activity in them are strongly encouraged, on orchard management including planting, pruning, grafting, health, and harvesting.  This may be more formal courses, or regular work parties, or ad-hoc arrangements among members as may be convenient.

MAN has worked with the Brecknock Wildlife Trust (now South and West Wales Wildlife Trust) for carrying out wildlife surveys in MAN and Member orchards with a view to improving awareness about their value.  If you’d like to participate in recording ecological surveys please do contact us.

Often these Members are very willing to make their collections available to other Members for viewing and inspection, and for sharing experiences.

This work has been given added importance in that Traditional Orchards were recently added to Local Biodiversity Action Plans.  The very existence of MAN contributes to maintaining such orchards.

As learning from developing and managing our collection may be of interest and use to other groups we give a summary of how things have evolved and the rationale for changes.

Visiting and working in all our orchards is best arranged with prior permission by contacting the Membership Secretary or Secretary.

We encourage you to seize these opportunities.

Paramor is owned by MAN and is our principle collection on about 2.2 ha.  There are 141 standard M25 trees mainly of local heritage varieties including those described in Welsh Marches Pomona and Apples of the Welsh Marches.  Another 107 trees in the ‘Nursery’ area are of trees grown on semi-dwarfing MM106 bringing earlier fruiting for enabling identification (or confirmation of identification) of them.  There is an active volunteer group that works in the orchard.

We are planning to remove nearly half the trees in the nursery area and some in the main area as they have been found to be ones commonly available and from out-of-area.  In place we’ll plant some more trees in the nursery area that have been recently found or others from member orchards, ones that we are still seeking to identify.  Some recently accreditted local varieties will be planted.

Grass is cut typically once every three weeks, the cost of which is one of our major expenditures.  Standard trees are pruned once a year in mid-summer for slowing growth and reducing risk of disease.  Tree is  the nursery area pruned on an exceptional basis as they are not expected to remain for more than 10 years.

Our first orchard was at Tredomen on 0.6 has of land, that the landowner generously has allowed us to use.  When planting began in 1995, the main function of the orchard was to provide a site where interesting apples which we could not name might be cultivated and studied. To help with their identification we occasionally had scions from the NFC, e.g. Dr Harvey, Arthur Barnes, King of Tompkins County, Scotch Bridget and Yorkshire Greening. At the time there was confusion over the identity of certain varieties we encountered in local orchards, notably Scotch Bridget, King’s Acre Bountiful, Catshead and Dr Harvey. We were shown trees said to be “Costards” at Winforton and Eardisland which turned out, after study, to be Scotch Bridget. Several “Catsheads” eventually proved to be Lord Derby.  That’s the reason we now have multiple copies of some varieties and also relatively ‘common’ ones among local traditional ones that we wish to preserve.

It has been an incredibly useful orchard for MAN, enabling us to accumulate a collection, gain experience, build contacts, help volunteers.  Yet is has now some drawbacks, nearly half of the trees are common from out-of-area, it is in a frost hollow, canker is prevalent, it is remote from more populated areas, and planting spaces are largely full.

Consequently we have decided to cease further development there, while ensuring that all interesting varieties are copied to Paramor, Ty Glyn, and elsewhere.  Grass cutting is no longer cut instead sheep graze.  There are 33 trees of which still have considerable interest to MAN and these have been protected with netting and barbed wire;  other trees have to take their chance and serve to distract sheep from those 33! 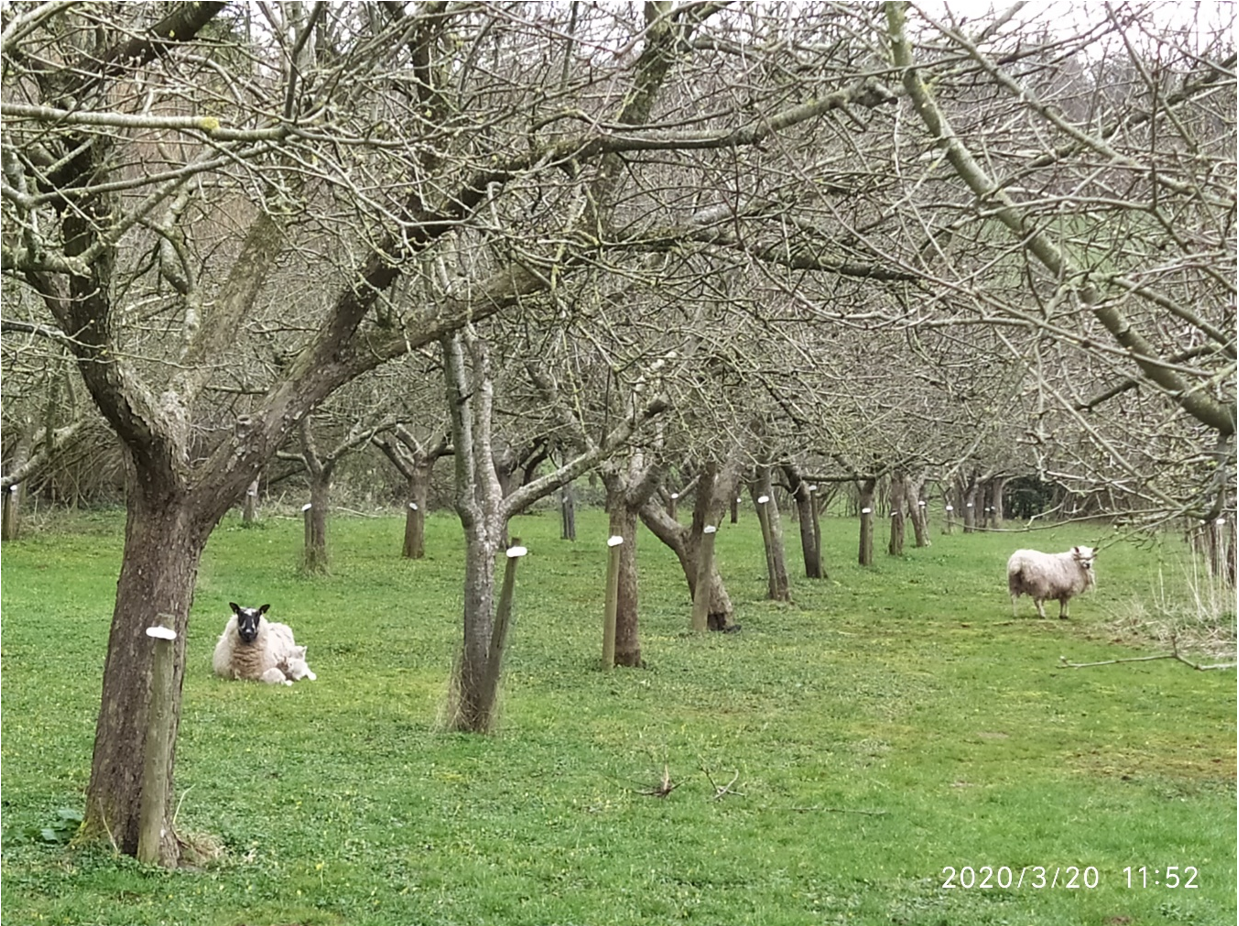 With the success of growing trees on dwarfing rootstock, and support from F P Matthews, we accepted an opportunity to establish and develop a new orchard of cordon trees on M26 rootstock at Ty Glyn, near Hay-on-Wye, on a member’s land.  There is a 25-year lease which gives volunteers confidence that their hard work won’t evaporate tomorrow.

It was established in 2018 and now has 386 trees, with another 150 planned for planting over the next two years.  It has been particularly useful enabling the consolidation of MAN and member’s collections to be made over a few years.  Consolidation has been quite complex, requiring deciding which varieties in to retain either as core (i.e. at Paramor) and/or for research/ID at Ty Glyn, incorporating insights from DNA testing, phasing re-grafting, grubbing up and replanting, protecting remaining trees from sheep, and relinquishing control of earlier orchards.  The task is now well underway.

Orchard and tree maintenance is much less time consuming and costly than for those on standard or semi standard rootstocks.  Pruning is done mid- and late-summer for encouraging spur development; varieties that are or maybe (partial) tip-bearers are noted and pruned for retaining some blossom buds; this is a subject of active work. 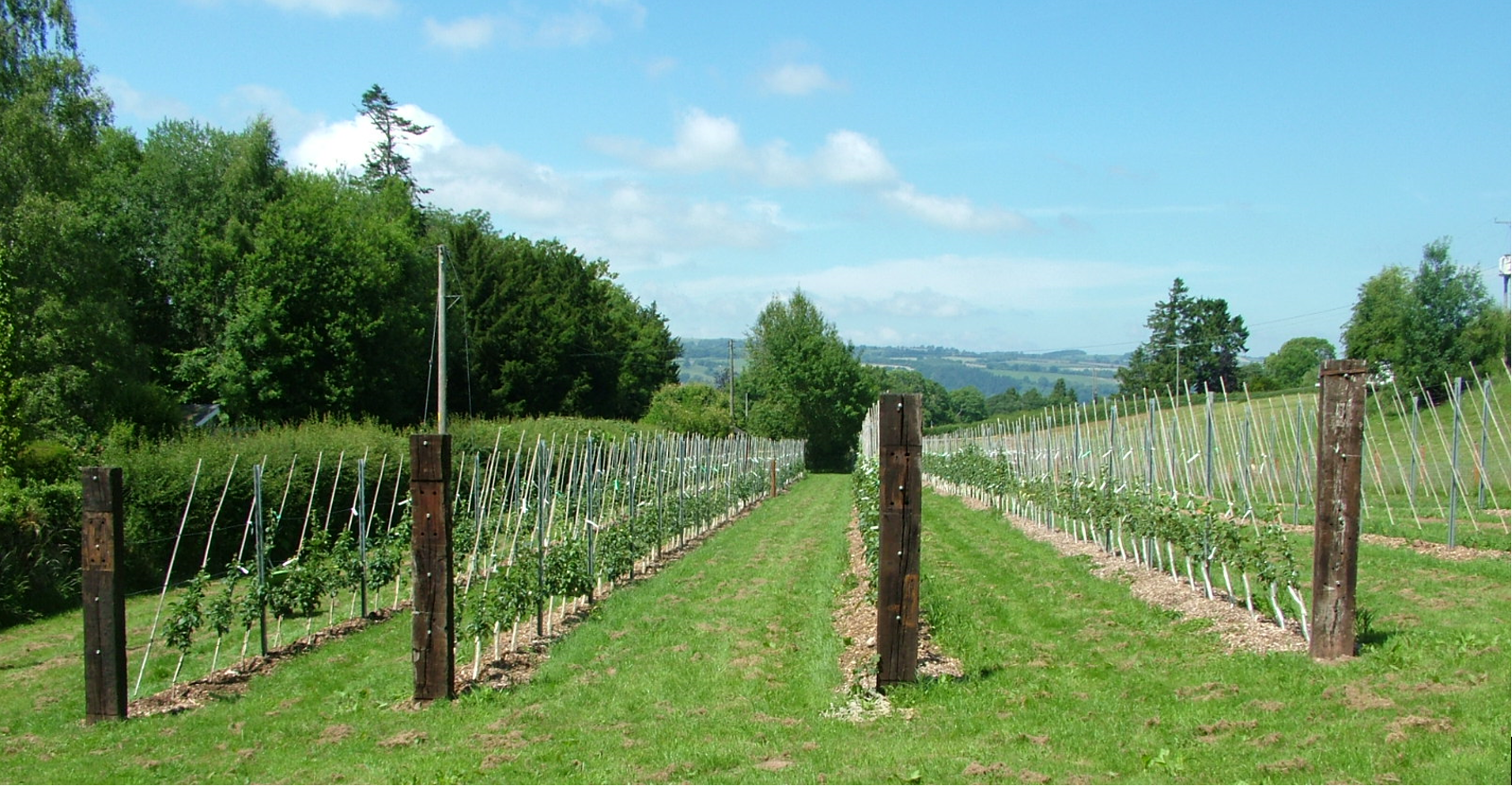 It is a private collection closely associated with a member; there are 48 trees on M25 rootstock of varieties typical of the Welsh Marches.

Our smallest collection. Just 15 trees on M25 rootstock of which half are of local traditional varieties.

This website uses cookies to improve your experience while you navigate through the website. Out of these, the cookies that are categorized as necessary are stored on your browser as they are essential for the working of basic functionalities of the website. We also use third-party cookies that help us analyze and understand how you use this website. These cookies will be stored in your browser only with your consent. You also have the option to opt-out of these cookies. But opting out of some of these cookies may affect your browsing experience.
Necessary Always Enabled
Necessary cookies are absolutely essential for the website to function properly. This category only includes cookies that ensures basic functionalities and security features of the website. These cookies do not store any personal information.
Non-necessary
Any cookies that may not be particularly necessary for the website to function and is used specifically to collect user personal data via analytics, ads, other embedded contents are termed as non-necessary cookies. It is mandatory to procure user consent prior to running these cookies on your website.
SAVE & ACCEPT